Is the world saved ? 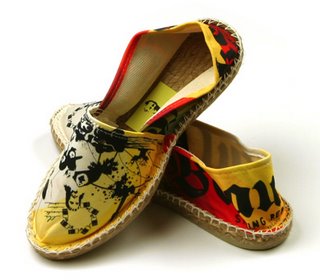 String Republic summer collection 2006 seems to think it can be saved by merging graphic design and fashion accessories. Designer Stéphane BUCCO, aka SOCKHO has revived the beach shoe "espadrille" and asked several international designers to join him in his mission. 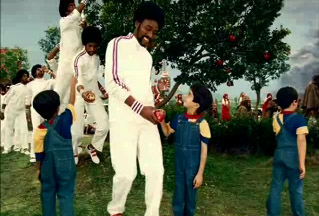 An amazing TV ad by Coca-Cola featuring "Love is the Truth" a song by Jack White (of the White Stripes) is available for a "limited time" on their british website. The song was written especially for the ad out of an obsession White has for the colors of Coca-Cola. At its turn, the ad gets its inspiration from the lyrics of the song and puts the colors (black, red and white) forward in a beautiful Muybridge/Marey motion study-like narrative, except it's actually in motion. The ad is not really due to air on TV which is a shame, but that's what Internet is for: surfacing the hidden.

There is more than one way to share your music, mine is through Last.fm, as you can now check on the right column of this blog.