Tonite i've had the pleasure to see
Il fiore delle mille e una notte, the first of Pasolini's trilogia della vita movies. It was silly, almost a farce at first, and then started to unwind as a poetic, joyous, surrealistic moment. Anyone who has the chance to see this on DVD should check out the original trailer, a pure treasure of craziness and beauty!

" Homeland Insecurity Advisory System(HIAS) is a public rating system that allows people from across the globe to determine the US Government's Threat Level by collectively rating RSS (Rich Site Summary or Really Simple Syndication) feeds from major US news sources. Turning the "Homeland Security" threat level on its head, the HIAS system will allow the people to collaboratively challenge this internally determined (and seemingly arbitrary) threat condition by rating each major US news source according to its support level for or against the US Government's actions. Finally, the citizens of the world have a voice in determining the threat level of the government itself. "
(excerpt from above website)

another great Jonah Brucker-Cohen work.
some people do make sense.

In Pursuit of Happiness

Yesterday I couldn't have enough of Neil Hannon. You know, Divine Comedy...

It was like a pure shoot of happiness, injected by a perfect combination of one voice, beautiful melodies, and 3 instruments: a guitar, a bass and an accordeon - sometimes, a keyboard, of course. I was transported - my ability of getting enthusiastic for a pop song well played still working.

At occasions, I could remember myself drinking a tea at Sophie's place in the 13th district or in this car with Madjid, Nicolas, Alain and Lisa on our way to Normandy. 'Promenade' was playing continuously and we'd try to recognize all the authors mentioned in 'The Booklovers'. I copied the Audrey Hepburn intro on the answering machine as my message. And when I travelled to Venice later, I couldn't think but of 'Something for the weekend' or 'Becoming like Alfie' as the glamourous quintessence of my trip.

On stage, Neil Hannon wasn't lacking very fine humour either. He teased the thirsty audience with a pint of Guinness that he would drink very carefully. Consequently after the show, Tomoko and I rushed to a pub where I ordered my first glass of the black stuff ever. Consequently too, Neil Hannon is known to me henceforth as the first man who 'talked' me into drinking a full glass of Guinness, two years and a half after I started to live in Dublin... What a groupie I'm making! I lost my Guinness virginity to a divine comedy....

what if u were right from the beginning but didn't know it? What if is wasn't so necessary to know what your doing (to label it, to name it, to market it) but rather to accomplish it?
Some people are devoted to whatever gives them back a good image of themselves.

What if I was wrong from the beginning? What if I don't understand - still - what is work, what is production?
What is devotion to work? I know some people who are beautifully devoted to their art, their work.
They are moved by a motivation or an energy that is completely estranged to me.
Always, I question then my own motivation. I reflect on it as if it's separated from my process of creation.
How does one work and create without motivation?

The philosopher Jacques Derrida is dead. I'm thinking mostly about his love of life.

Acclairism || feeling video
gives you a scary and delicious hint at what the future might feel like.
By the way, "Have a wonderful journey!"

Life seems ordinary, even after the Sinaï explosions. People call their friends to make sure, watch TV to learn more about what happened, how it happened, etc, zapping between local tv and CNN.

My personnal concern goes more directly to the beach. I have no real conscience of what's going on, or don't want to have it, so I guess I'll just head for the beach during my "lunch break" or whenever, it's just a 10mn walk from our small appartment on Ben Yehuda street, in the north of the city.

I am under the impression that the design concept we have defined is pretty strong, very telling, but that the object we have derived from it lacks some kind of "edginess".

Below is a traffic light that was hacked by some artist as the result of a collective action upon traffic lights. I find the project quite inspiring, even if this particular result might not live to our expectations. But what exactly do we expect from design? Unexpectedness ??? 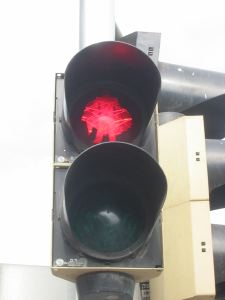 Arianna has asked me the list of places I took her in Paris but also I meant to do that list for a long time anyway. This is my best of for food, places and more. I should do that for Dublin as well, some day. And Vienna. And London. And and. But shuh! Let's start with my home. In few parts.

Part 1.A Restaurants. (The most interesting part)

Le Bucheron
14 rue de rivoli, Paris 1.
Italian. Fresh pasta prepared in front of you by the same cook as far as I can remember (a long time ago). Nice ambiance, cosy and busy. My favorites: the Mezzelune and the Gnocchi. Great tiramisu or coupe Amarena for dessert. Price for pasta dish: 11/12 Euros.

Le Vin des Pyrénées.
Rue Beautreillis, Paris 4.
French. Enormous selection of wine. Yummy food. I have been disappointed on a couple of occasions but never when I had the Moelleux au Chocolat, a dessert to cry for.

Chez Janou
Paris 3.
South of France. Booking a must. It is always crowded and you know why of course. It's good, very good and not expensive.

Chez Enzo.
Rue du dragon.
Paris 6.
Italian. The first time I went there, I cried over the menu. Because stupid as I was, I couldn't stand not understanding it: it was all in Italian and I didn't know a word of it. I was young and proud. Renaud helped me and I ended up trying the Strozzapretti di Abbruzzo. It's still that same dish I'm having every time I go there. It's simply perfect. Some other time, I have enough appettite to share the Pizza Bianca. The restaurant is not a pizza specialist or maybe actually they understood all about pizza: they only have 3-4 pizzas on the menu, they're small, and bare only few ingredients. What more can you need?

That pizza place on rue des Rosiers.
Rue des rosiers.
Paris 4.
Another kind of pizza. The best of the world. Some people have criticized me for using that expression. But why would I say it differently when I found my favorite pizza in the world? Just order the most simplest one: with tomato sauce and cheese. It's that way that you'll understand everything about it. Thin, crusty, sweet and salty. 9 Euros. Closed on Saturday (Shabbat).

La Perla.
Paris 4.
Mexican. I'm not an amazing fan of Mexican food except when I go to La Perla. It's subtle and has a nice atmosphere.

Sushi-Bar on Bd des Italiens.
Bd des Italiens
Paris 9.
Japanese. Not the best Japanese ever but I simply love to go there. It's quiet and the food is great. A nice stop for a heavy shopping day or when you come out of a nearby cinema at 4pm, slightly hungry because you saw that character eat all the time in the movie.

Krung-Tep
Paris 20.
Thai. Finally. Finally, an amazing Thai place in Paris. Thanks to Claire and JB for letting me know about it. I was getting crazy not to find any decent Thai food around. But this one has also the style and the decor. Long legs beware!

Tao.
Rue Saint-Jacques.
Paris 5.
Vietnamese. I know that Tao is just what I want about Vietnamese food. I won't say the "best in the world" this time because I don't have enough experience in that range. I will just say that so far, I haven't had better conception of Vietnamese food than at Tao's. It's a small restaurant. So book!

Au coin des gourmands.
Rue Dante.
Paris 5.
Indo-chinese. Or so they say. A mix of cultures: Cambodia/Laos/Vietnam for the most part. Amazing food experience guaranteed. The soups are so tasty. If you order a soup as a starter, then you have something coming-up for main course. Ah ah ah! What a joke. You won't have more appetite, believe me. Yet, of course, how was it possible to just stick to one dish when you read that crazy menu? I understand because I make that same mistake all over again. Can't learn a lesson.

Café Beaubourg.
Face to Centre Pompidou
Paris 1.
French and more. Some people say Café Beaubourg is too posh, too expensive, too this and that. For me, it's a great atmosphere, on the first floor, by the window, when winter is coming and it's 5pm. You're hungry - you might have skipped lunch for some reason. For 10 Euros, you have a great portion of foie gras with delicious toasts - who said it was expensive?
On the menu, there's is a tasty list of small dishes or bigger meals between 8 and 14 Euros. But of course, if you order one of their great cocktails, that's when the bill gets a bit more excited...

La créperie du Pécheur.
Rue St-André des Arts.
Paris 5.
Galettes de Sarrazin and crepes. Not the best ever but again, the galettes are very very good. The lunch menu is a classic and I used to take it when I was a student at the near-by Sorbonne on special occasion. My favorite crepe - to this day - is on the menu, the Kermaria and the dessert can be taken from the entire desserts list. A rare priviledge in the history of lunch menus. Especially with this dessert list. Yes, for 9 Euros, on top of the savoury galette and the bolée de cidre, you can also have that crepe with pear, chocolate sauce, whipped cream, apple compote and vanilla ice-cream! Or not. Your choice.

Le Père Fouettard
Near les Halles.
Paris 1.
French. They have an excellent foie gras to eat with a glass of excellent Coteaux du Layon. The place is nice and the service efficient. I like to go there. For my 26th birthday, or Numer's closing dinner, or other occasions, I mainly have good memories of that place.

This list is getting long and so is my appetite after writing so much about food. It's time to have a break. Next part: 1.B. Restaurants.