The opening of "Abstract" took place just about 3 weeks ago. It was an incredibly rewarding moment.
First of all because I thought it would never happen. Again a couple of days before I was still getting crazy over Windows Vista, then Windows XP trying to make the pure-data program work. From Paris, Vincent would try to understand why it wasn't working on the Japanese PC while it was rolling on his machine. But with the time difference and the distance, it was taking a lifetime and if it wasn't for Carson's precious debugging help, I would have sunken deeper than the sunken ship in my sorrow.
It was also rewarding because all the people who attended the opening praised the work and I felt quite happy that they got the intention in the piece without any particular explanation.
In particular, I remember Ikuko, that I met that evening who came by chance at the gallery, not knowing what was going on and wrote me an email later telling me that the installation gave her the opportunity to take the time to face herself and her life and get "subtle reminiscent feelings, recollecting memory from childhood, school days, travel etc.."

Izumi, the curator of gallery éf, also got a beautiful idea: she invited Ouchi, a Japanese chef to present her summer sweets to be served with tea, in the gallery space. So people would sit on the carpet where the projection was happening and proceed to an informal tea ceremony. I managed to taste some of the confectioneries she made and got from that a delicious food experience.

All together, I felt people were very at ease with the experience, taking the time to enjoy it and to discover its different layers. My initial intention related to time length and expectation felt clearly embraced. And along the way, as it always happen, I noticed that people put emotions in it or other intentions that I didn't foresee.
Izumi keeps on letting me know how it's been going and for 3 weeks, swell and beyond.

I already named the people who helped me for this piece in a previous post - yet I feel the need to mention again some people whose support was an amazing gift: the team of gallery éf, Izumi and her mother, her aunt, her brother and Takeshi who, among others, managed to get Sanyo to lend a videoprojector; Carson who made a computer from his lab at the University of Tokyo available for the duration of installation and hosted me at his home in Tokyo; Julie who came with me to Japan, to make some shootings for her own project but who took the time to stand by me in the darkest hours, always up for some good laughs; and of course, David who I met everyday on Skype so I could share with him all the emotions of this profound experience and who at a distance provided me with his comforting and uplifiting presence.
As well, just before my departure, during the last Dorkbot Paris, Stéfane offered Vincent and I the space needed and all kind of materials to test the piece one last time and Jean-Baptiste who was around helped us on more than one occasion.
And I also forgot to mention last time another Jean-Baptiste (Verguin) whose feedback I always enjoy.

The installation is on in Tokyo for another week. It will also be exhibited in France, at the Nuits de l'Ososphère in Strasbourg at the end of the month of September.
I'm currently editing a short video for demo but in the meantime, here are some pictures. More of them are available at the gallery éf website, in the Abstract project section, along with an interview Takeshi made of me, with unusual questions... 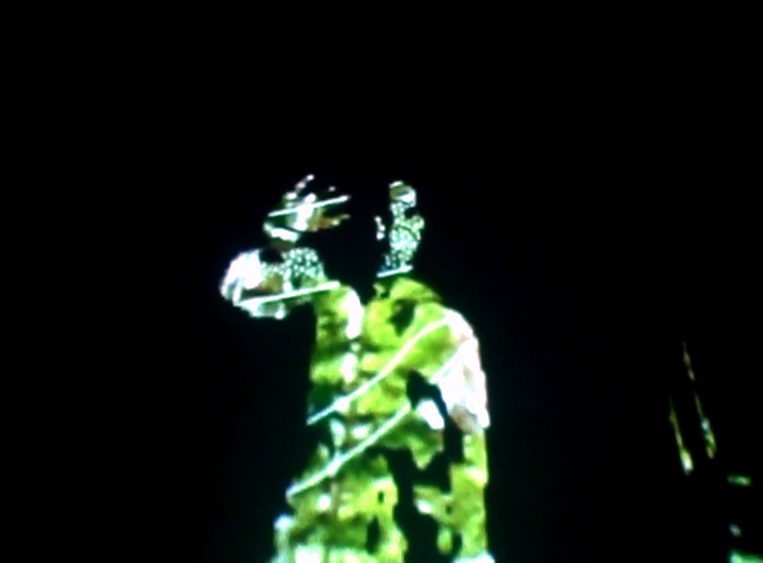 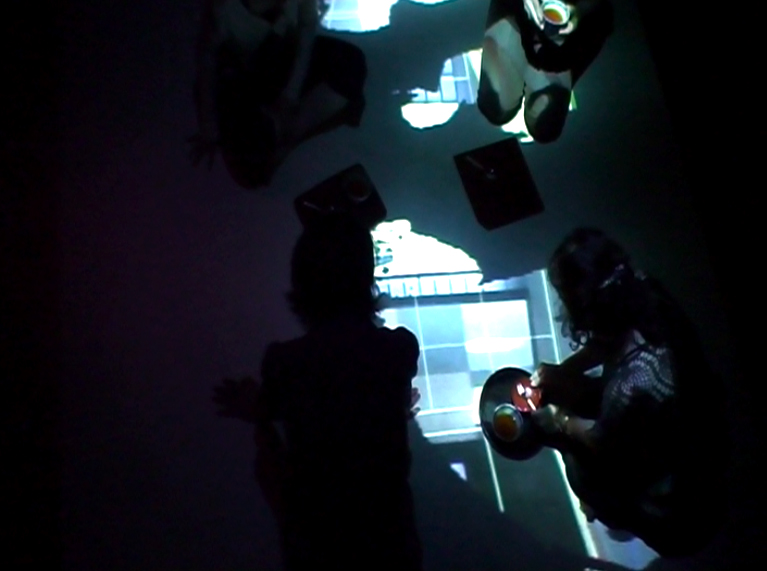 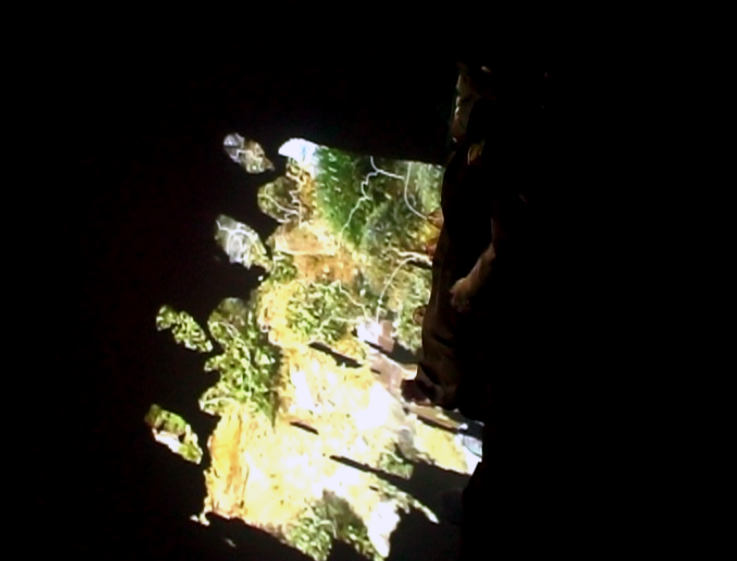 Last week, during one of my last night in Tokyo, I felt an earthquake. For the 1st time in my life.
It woke me up, and I must admit, very gently.
A couple of weeks before, Yoshiko had explained to me how to acknowledge the dangerous potential of an earthquake. Turns out, there are 2 successive types of movements: an horizontal one followed by vertical one.
If the horizontal one goes on for few seconds, it means the earthquake is not happening where you are and you can feel safe, because the vertical movement won't be very strong - indeed, it's the vertical one that is dangerous..
If the horizontal movement lasts for a very very short time, then the vertical one will be longer and it means: get under a table.
The same night an earthquake hit Peru, one hit Japan, north of Tokyo, near Sendai, 7.2 on the Richter scale. It didn't cause any victims.
At that moment, it was maybe 4 or 5 am, I was laying on my futon bed and as soon as I felt the horizontal earthquake, I knew what to expect, the vertical movement lasted maybe 3-4 seconds, and then, nothing and then again, a quick horizontal afershock. All together maybe 10 or 15 seconds of an incredible physical sensation that I had never felt before. It was an intense experience, actually very enjoyable, maybe because I was asleep, maybe because I was lying on a futon, hence very close to the floor. I can't describe exactly what my body felt but I was surprised to discover there were unfamiliar types of physical sensations. I felt naive and excited at the same time.

Yesterday, I had the 4 film rolls I made in Japan processed and digitized on cd-rom. It's always a bit disappointing to check out the result of digitized film photography. it's clearly not meant to be scanned, or maybe it shouldn't be done in an automatic process, but then here we talk about a different kind of costs.
Before I take the time to put a larger selection online, I picked a sample of pictures to illustrate the different moments of my journey. 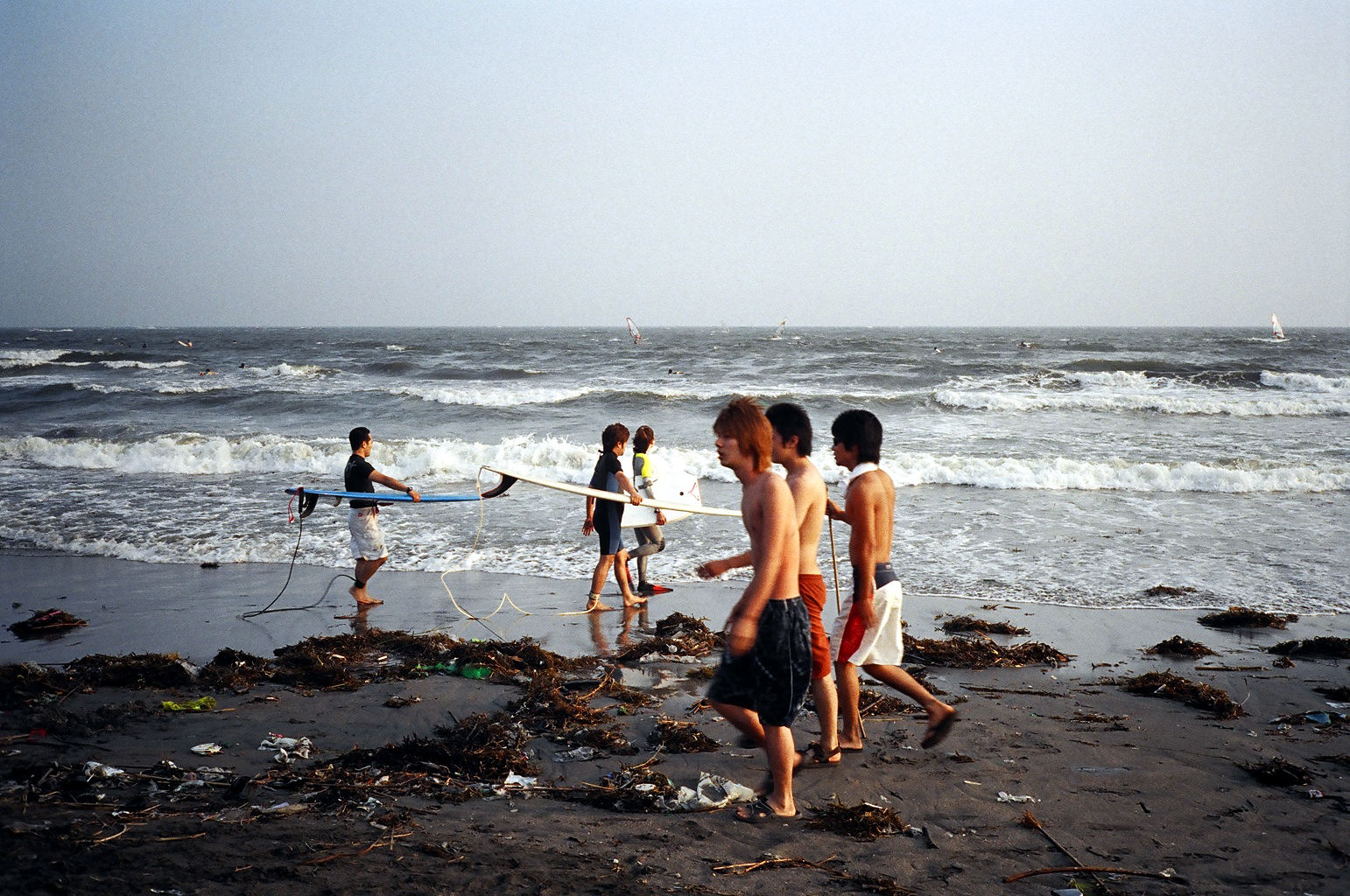 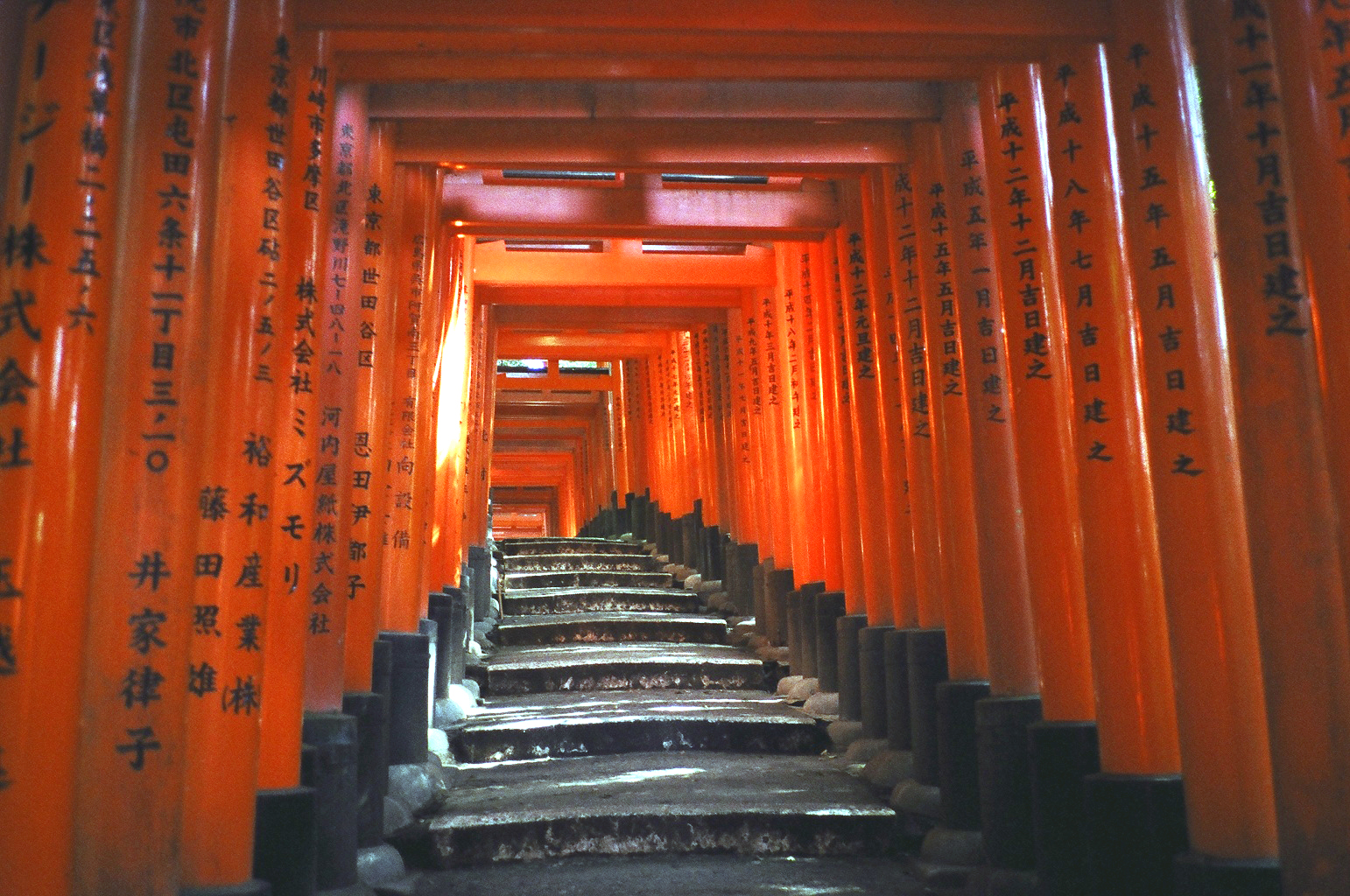 Tomoko and I in Pontocho, Kyoto - photo taken by Julie 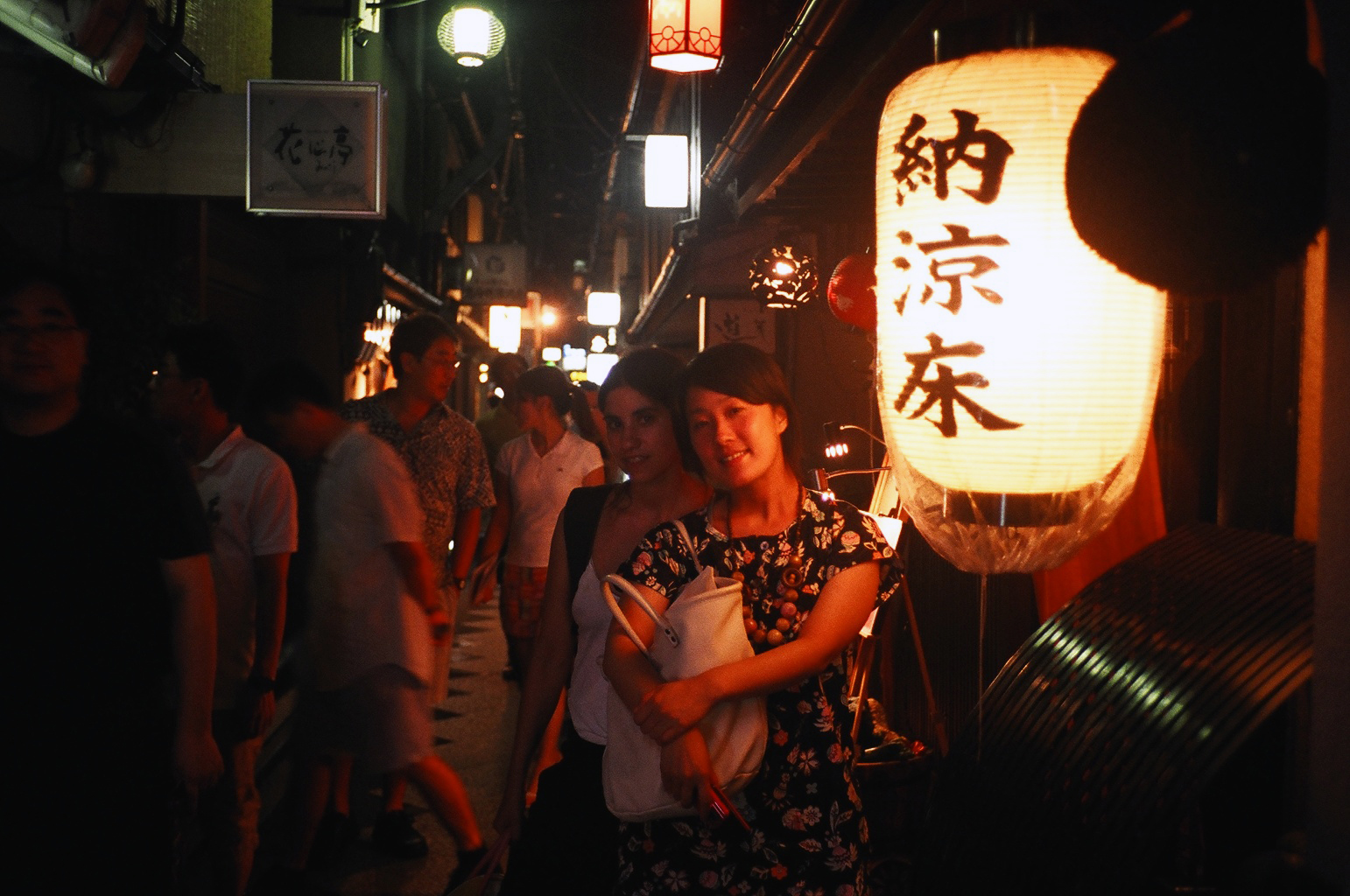 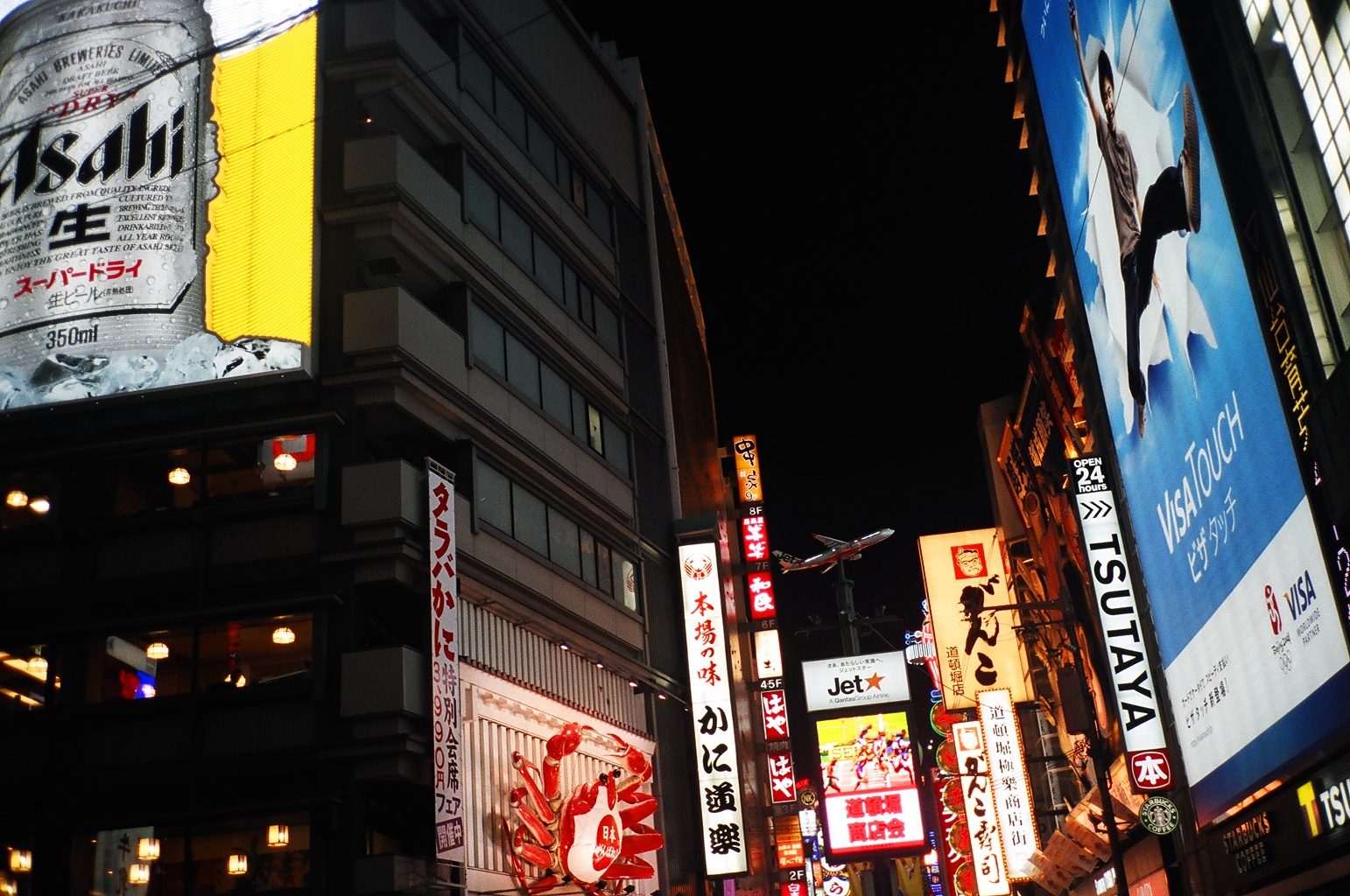 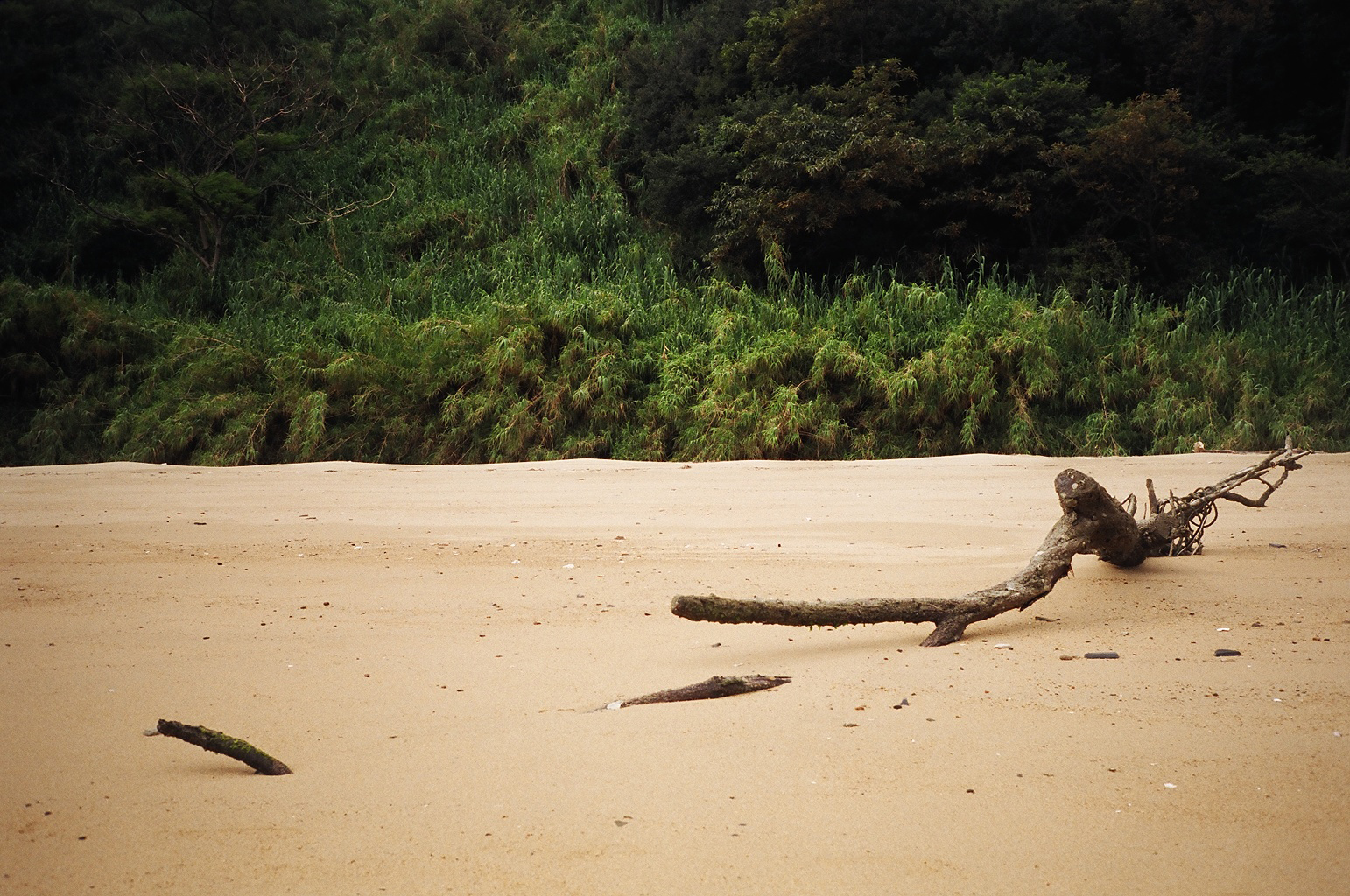 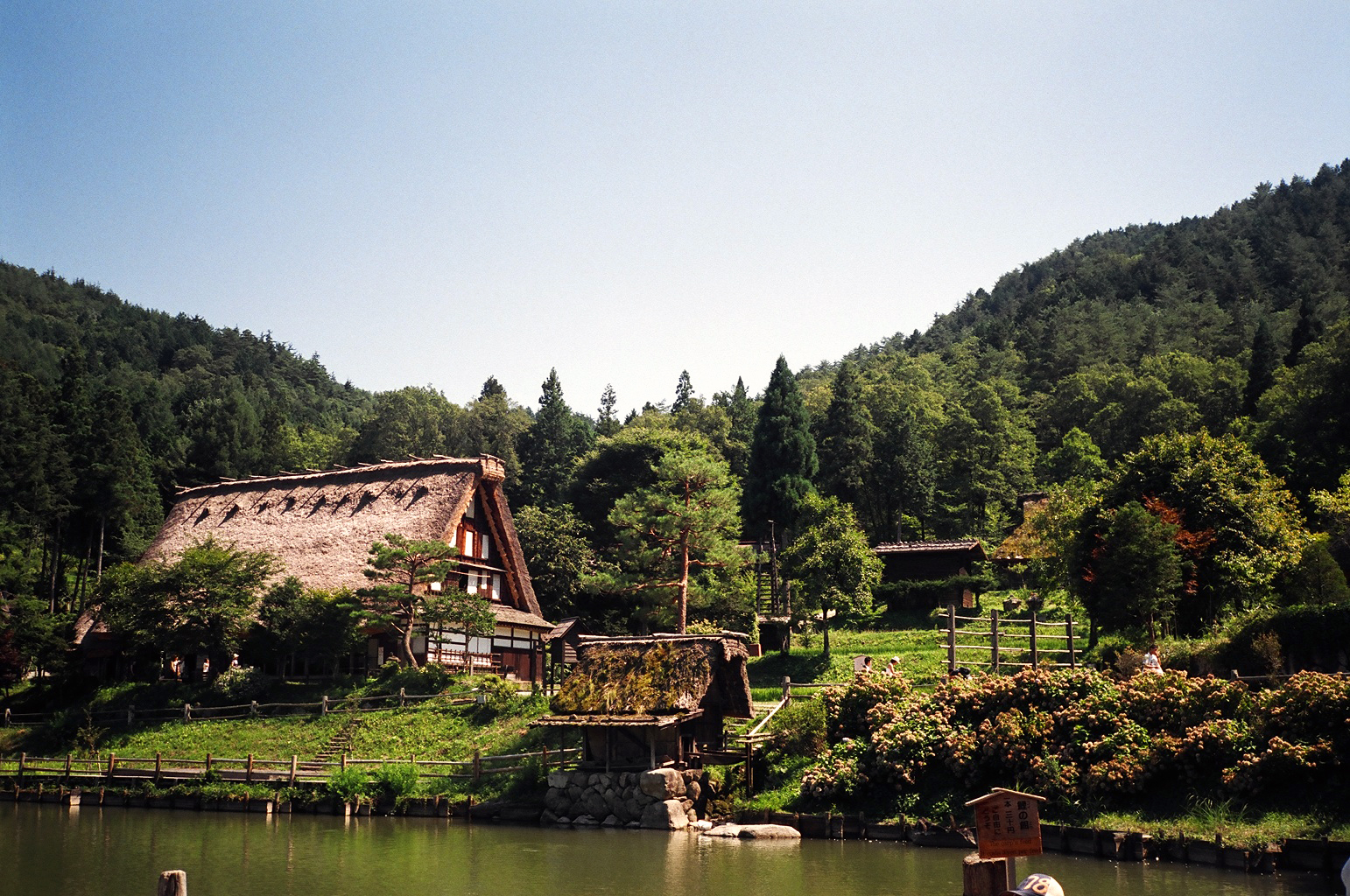 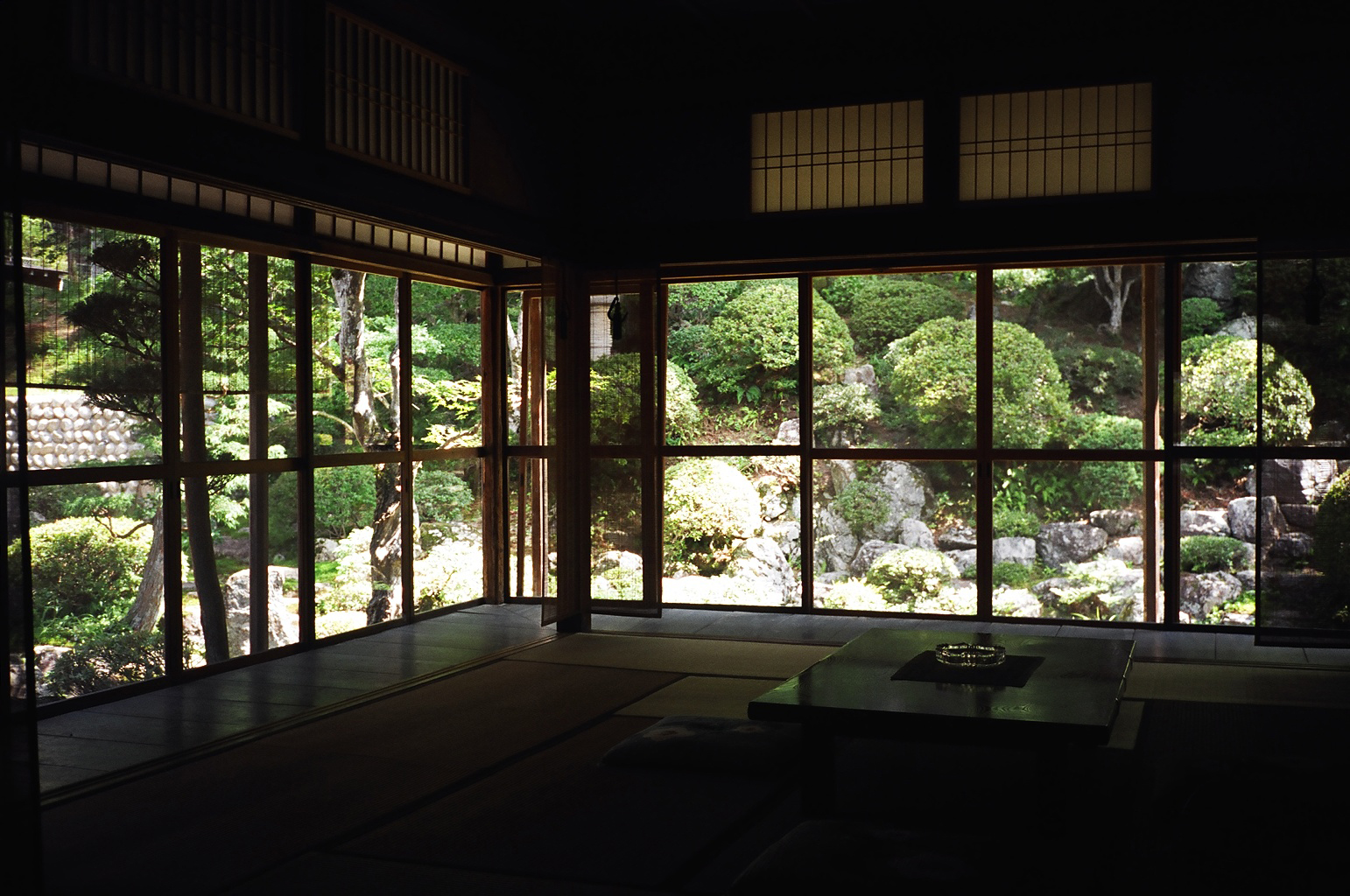 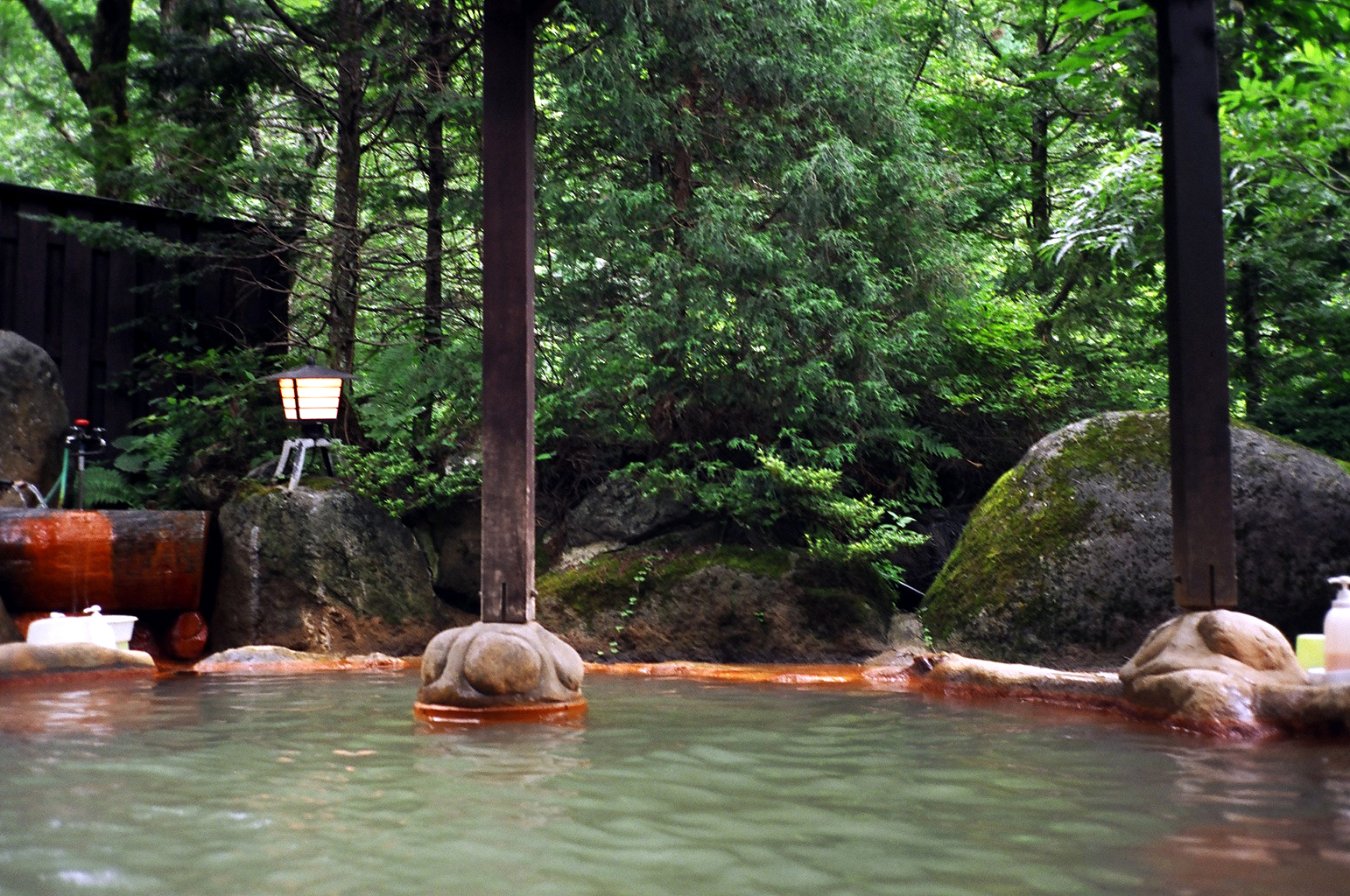 In a sentimental mood

Maybe it's because I just finished "The Fortress of solitude" by Jonathan Lethem, maybe it's because my journey is coming to an end soon as I'm back to Tokyo, a couple of days before taking the plane to Paris, maybe it's because of all the intense emotions I've experienced in the past 3 weeks, maybe it's because it's in the nature of the travel - a mixture of cinematographic images, clichés of nostalgic dreams and physical exiled exhaustions - but I can't help my melancholy.
Whether my mind is set in 70s Brooklyn, NY where a friendship between a white kid and a black kid seems to have to be doomed, or in nowadays Tokyo, Japan, where I'm floating in a transitional reality, I get a glimpse of the beauty of love, and of kindness, made out of past and present bonds.

Osaka is like a giant Shibuya - except people are essentially looking for fun, not for commuting.
My first impression when I visited last year is confirmed: young japanase people with a twist and bleached hair come to party in Osaka.
You could think it's therefore not the place to go when visiting Japan - well, it's actually so friendly, and crazy and smooth that the town makes a pleasant stop on your way to the south or back to Tokyo.
I hadn't planned to go back there but I don't regret it came up in my adjustable travelling plans. I could stay at the Hotel Chuo I mentioned in that blog before: it makes your life easy at around 15 euros a night for a private room, connected to a high-speed internet access that your laptop has been craving for, and 2 subway stops from the liveliest district. I also appreciated the one night-break that was the western-styliness of that room. It made a big contrast with my stay in Kyoto where I traded comfort, privacy and air-condition for a bargain that came along with mosquitoes, tropical heat, and... travellers. But then it was just for 3 nights and it meant more pocket money for shopping. Some times in life, you gotta know what you want.
My first plan was to leave Kyoto to head north for the Noto-Hanto peninsula. But then that's just the day when somebody somewhere decided I couldn't withdraw money until the day after. My plans were set back for a day, so Noto-Hanto was out of the picture as I wouldn't get the time to enjoy it properly. I rearranged my plans by way of Osaka, and headed south instead, to the Inland Sea.
Manabe-Jima is the name of the island where I arrived with the ferry, the only gaijin, to discover a small paradise, with the nicest people, and a beautiful beach almost to myself.