This is how we do it in France

In a completely unpredictable and incredible turn of event, the parliament of France just legalized yesterday night non-commercial peer-to peer exchanges. This miracle might last only for few more hours as the government is decided to pass the law which allows the exact opposite, mainly the control and the restriction of private copies (by legalizing for instance Digital Rights Management softwares and somehow threatening some open source systems).
Debates have been quite fierce at the Assembly for few reasons: first, the government decided to submit the law to vote in "emergency", meaning it would only be read once instead of twice, and this just a couple of days before Christmas (when it's been on the table for 4 years). This cynical procedure hasn't produced the expected result. There were still 60 deputees ready to fight until late in the night. What more, in a very rare movement, deputees from the majority itself (right wing) and from the "centre" (usually supporting the right-wing) have joined left-wing amendments to counter-act what the government tries to impose on us.
This just shows that the questions of authors rights and peer-to-peer "philosophy" cannot be reduced to a hidden way of making a Xmas present to the likes of Microsoft, Apple, Sony, Virgin and EMI.

Darling, how about a donkey for xmas?

Oxfam, always very innovative with their campaign for donations, has launched a series of "funusual" gifts that you can make to your friends or to yourself, called "Oxfam Unwrapped". How about offering a 5% share in a mango plantation (80£), a farmer training (64£), an entire classroom (1700£), a toilet (30£) or yes, a donkey (50£)? Of course, you actually don't get to host a super cute camel (95£) in your urban tiny home, instead it gets to go where it's needed the most (or another element of the equivalent importance)... I think Oxfam succeeds very well in involving donators often in a playful way, in bringing an awareness, away from the logic of charity, rather to a sense of participation in a project that becomes ours as much as theirs. They surely deserve a 3rd or 4th post in this blog about their work! 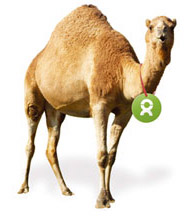 O Graphic Design, Where Art Thou?

Etienne Mineur, whose blog is listed just here on your right, has published this year's worst logo designs in France. Most of the French major companies and institutions changed this year their visual identity, like EDF (Electricity of France), or Le Crédit Lyonnais (a bank leader). When you see all their new logos put together, it's like a nightmare vision. Somehow it's even enjoyable to see so much junkiness. Etienne makes also an interesting and bold comment (in French) as a graphic design expert.

It is not without pride that I would like to draw attention to Simon Starling, the conceptual (so-to-speak) artist that has won the Turner Prize this year. I discovered his work only a few months earlier, i have to admit, during the Basel 2005 Art Fair when it had an amazing retrospective, "CUTTINGS", held in Basel's museum of modern art, but he immediately entered my top 5.

In the "shedboatshed" project, exhibited in Basel, he finds an old wooden cabin along the Rhine a few kms upstream from Basel, tears the cabin down and makes an old fashioned boat out of the wood. He then travels down with any extra wood on the river down to the Kunstmuseum, where he decontructs the boat to rebuild the original cabin.

Simon Starling's work is about forms of energy, fighting entropy, transformations. Love it while you can.

The place we are

Ulf (co-founder of Superficiel) doesn't write in this blog (because he still doesn't feel like it) but I couldn't resist to quote something he said today (with his approval): "personality is one thing, geography another".
As always, Ulf was a great inspiration and therefore I, hereby, declare the creation of a new concept: "Geopersonality" (the search of the word didn't match any document on Google - does it mean it doesn't exist?)
Definition: singular noun
1. The study of the relationship among personality and geography, especially with respect to the foreign policy of a person.
2. A combination of geographic and private factors relating to or influencing a person.

Alright, this definition is a bit flawed because it was kinda modeled after the one for "geopolitics" on answers.com but it's a start and it works pretty well for now, doesn't it?
But most importantly, the question is: What Geoperson Are You?


can YOUR mobile phone stand this ultimate test ?
With Christmukah approaching, this is definitively something you'd like to try for yourself : put your VERTU handset on the ground and run over it with your latest Porsche just to make sure you haven't been cheated on the quality... It's only 4750 euros anyway, so send us your pictures !